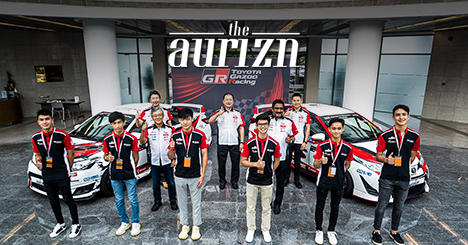 UMW Toyota Motor Sdn Bhd today announced the introduction of the Gazoo Racing Young Talent Development Program which is aimed at identifying and nurturing young Malaysian racing talent between the ages of 14 and 20 who are transitioning from the sport of karting and sim-racing to saloon car racing.

The programme scouted and drafted six young racers (based on their karting and sim-racing accomplishments, overall performance and level of commitment) to be coached before being provided with the opportunity to compete in Season 4 of the Toyota Vios Challenge series.

“One of the principal achievements of the Toyota Vios Challenge has been its ability to not only attract young racers but giving them an equal opportunity to excel competing alongside more experienced racers,” said Akio Takeyama, Gazoo Racing Malaysia’s Chief Motorsports Officer.

“Moving forward, the Toyota Vios Challenge will continue to build on competitive driving with Gazoo Racing expanding its involvement in Malaysian motorsports, including providing a platform for young drivers who are moving up to the higher levels of motor-racing.”

Like previous seasons, the Toyota Vios Challenge retains its one-make format which will see all competitors in the Super Sporting, Sporting, Promotional and Rookie Classes competing in identically race-prepared Toyota Vios sedans. Toyota will also provide race cars to racers in the Rookie Class.

Racers drafted into this programme Takeyama said, will undergo intensive training both on and off the track under the close guidance of instructors at the Gazoo Racing School beginning this month and must satisfy a number of criteria before being certified competent to race. The racers must also fulfill all conditions for the issuance of a national competition license (circuit racing) by Malaysia’s motor-racing governing body the Motorsports Association of Malaysia (MAM).

“The success of the series in nurturing young talent could not have been better validated than with the crowning of 16-year-old Hayden Haikal as the Sporting Class champion in Season 3 with another teenage driver, 18-year-old Bradley Benedict Anthony clinching second place overall in what was only his first year of saloon car racing, both of whom were karters making the transition up to saloon car racing.”

The past three seasons of the Toyota Gazoo Racing Festival and Toyota Vios Challenge, was ultimately about bringing motorsports to the masses, cultivating greater awareness, interest and appreciation in motor-racing. The concept of racing on specially-built street circuits not only made motor-racing even more accessible and approachable to the general public, but it provided competitors with the challenge and experience of competing on unique purpose-built tracks that placed greater emphasis on precision driving, enabling them to build both their confidence and skills.

“The commitment from the onset had been to establish an even bigger footprint in Malaysian motorsports and to be in the position to give Malaysian motorsports a further boost. In three seasons we have been able to make an impactful difference by establishing a series that ran on purpose-built street tracks instead of at traditional racing circuits. That successfully attracted not only first time competitors but also amateur and professional racers to the series. We even succeeded in grooming a number of local celebrities who have gone on to becoming competitive racers. With Season 4, we intend to take this one step further by providing young racers with a gateway into the higher levels of motor-racing.”

For sim racers Naquib Azlan and Mika Hakimi, the step up from the virtual world into circuit racing is both exciting and a once in a lifetime opportunity.

“The principles of racing remain the same, but the dynamics of competing in a kart and on a simulator compared to that of driving a saloon car are entirely different and this is an area the selected racers will spend a great deal of time assimilating to. The goal is to not only provide them with a stepping stone into saloon car racing but to ensure that the they are able to make this transition while retaining the level of competitiveness they have each demonstrated in their various fields,” said Takeyama, adding that the Gazoo Racing philosophy embodies Toyota’s mission to build better products via its involvement in motorsports as much as it places an equal importance on developing its people, in this context nurturing potential talent.

For karter Putera Adam who at 14 is the youngest of the six rookies, age is unlikely to be any disadvantage as he has already been competitively racing for 8 years since the age of six, twice been crowned Asian champion, and finished on the podium twice in the WSK Super Master Series in Italy.

“My ultimate goal is of course to become a Formula 1 driver and the opportunity to be in this program is a step closer to reaching my goal,” said the young man from Subang.

Meanwhile, for 18-year-old Jwan Hii who is currently awaiting entry into university to pursue a degree in information technology and/or business management, the opportunity to join the Gazoo Racing Young Talent Development Program is also a natural progression from karting.

“I’ve always loved cars from when I was a kid...It is a great opportunity that not many people get and I am truly blessed,” said Jwan who has been competitively karting for four years. “If I do well in this program, the goal will be to try to find a seat with a team competing in saloon car racing.”

“At 20, I may be too late for Formula 1, but my aim is to become a world champion in any of the racing series,” said Naquib who only began venturing into virtual racing two years ago and is currently a mechanical engineering undergraduate. The second of four siblings, his entire family is into motorsports including his father Nor Azlan Zulkifli who introduced the children to both virtual racing and track days.

While Naquib already has a valid driver’s license and has some seat time participating in track days at the Sepang International Circuit, 17-year-old Mika Hakimi will only know the feeling of driving a car when he steps into the Toyota Vios for the first time at the start of Gazoo Racing Young Talent Development Program training sessions.

“The biggest difference will be the physical sensation, something you don’t experience on a simulator but this will be advantage because you can actually physically feel how the car is reacting on the track. It will all come down to getting a proper rhythm,” said the young man from who spends an average of four hours a day practicing on a simulator, clocking anywhere between 300km-400km per day, and has competed in close to 100 virtual races since he picked up the hobby in March last year. He is also preparing for his Sijil Pelajaran Malaysia (SPM) examination.